The Colby-Curtis Museum is presenting, from July 29th until September 5th, an exhibition entitled :


This exhibition had been prepared and put on display at the Colby-Curtis Museum in Stanstead in 2008. It had always been our goal to show it on site, in North Hatley itself, as a means of reaching out to our clientele and members living in other parts of the territory we serve -- that is, within the boundaries of historical Stanstead County, as it was known when the Stanstead Historical Society was founded in 1929. In this case, we felt that the residents of North Hatley were entitled to see this exhibition in their home town, and that visitors to the village would take advantage of this showing to learn more about the beautiful area and peaceful people they were visiting. We also felt that residents of our area, outside of Stanstead proper, should be made aware that the Colby-Curtis Museum's resources -- archives, collections, staff and know-how -- were always available to them, and that the museum was keen on developing outreach programs and services aimed at the region at large.

The North Hatley 1886-1914 exhibition is being shown this summer at the Gillygooly Art Gallery of North Hatley, located at 96, Hatley Centre Road, about 1 km east from the village center. Visiting hours are : from 1 p.m. to 5 p.m., seven days a week -- and admission is free, courtesy of several sponsors from North Hatley, and from the Caisse Populaire of Stanstead. We would like to express our warmest thanks to Mrs. Margot Graham-Heyerhoff, owner of the Gallery, who volunteered her space and her own time free of charge to hold the event : it was also courtesy of Mrs. Heyerhoff that visitors were greeted with good wine and food for the vernissage, held on July 29. The event brought together over 150 rather enthusiastic viewers.


This exhibition was initially researched and curated by Chloe Southam is 2008, designed by Pierre Rastoul, with graphic contributions by Sylvain Leblanc.  The funding for its production was generously donated by Mrs. Nicole Marcil-Gratton and Mr. Robert Gratton, as part of a 5-year series of exhibitions on Summer Living in the Eastern Townships.
Since then, the contents have been revised and expanded for the North Hatley showing, using additional resources from the Colby-Curtis Museum collections, as well as artifact loans and other help by the Le Baron General Store in North Hatley, and from the Société d'histoire de Sherbrooke. The new installation was put in place by museum staff members Geneviève Thibodeau and Marcel Laflamme, under the supervision of director-curator Pierre Rastoul.

The village of North Hartley was initially populated, during the first half of the 19th century, by settlers originating from various parts, either Canadian, British or American. In the early settlement, life was focused on subsistence : agriculture, forestry and diverse trades and crafts. In the mid 1880's, the "rustic" ways of life of North Hatley were radically transformed by incoming summer residents, most of them from Baltimore (Maryland) and, in later years, from other southern states of the United States. In this period following the American Civil War, Southerners were not too keen in spending their summers to cool off in the Northern states -- wartime dissensions, suffering and losses being still acute on both sides --, so they felt that going further north into Canada was more comfortable for summer vacationing. Consequently, North Hatley became a very popular resort destination for these American Southerners, who brought along their kin and relatives, at times their staff, to this neutral, peaceful and attractive village in the North. 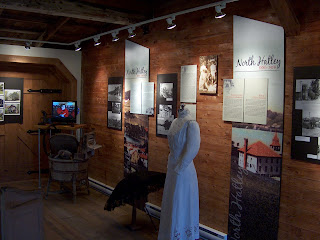 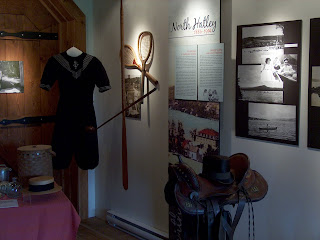 Indeed, the coming of these summer residents brought about a boon in business for North Hatley locals, who began to cater to the newcomers, and build up an economy based on boarding houses and luxury inns, local services and transportation to the summering visitors, building cottages for them and, eventually, opening markets for their produce and woodland products in the Southern U.S.A..
Stronger and stronger as the century came into the turn of the 20th century, this economic and demographic boom was boosted by ever-strengthening ties between locals and their visitors, and perhaps even more, by the advent of the railroad to North Hatley, when the Massawippi Valley Railway, and later, the Boston & Maine Railroad reached the "outlet" of Lake Massawippi at North Hatley, towards the end of the 19th century. Within 20 to 30 years, the face of North Hatley changed radically, turning its landscape and rustic ways of life, into a tightly-knit community of villagers, bound together by their summertime interactions and by a common love of the local scenery, if not the weather itself.

Such is the story, the "North Hatley Story", which is being told through words, and a wealth of images, maps and period artifacts in this fascinating exhibition. A warm welcome is extended to all. 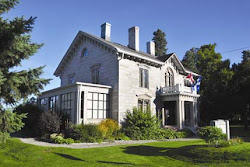